Laufen CZ was established in 1999 and it represents the Laufen, Roca , and Jika brands both on the Czech and Slovak markets, as well as in other Central and East European countries. The Jika sanitary ceramics has been manufactured since 1878. It is an important part of the Swiss Laufen syndicate and since 1999 it has become a part of the Spanish Roca group, which is the biggest European manufacturer of sanitary ceramics. In 2006 Roca has become No. 1 in Europe. The production line of all the brands include complete bathrooms; i.e. the sanitary ceramics (bathroom sets and other products), bathroom furniture, bathtubs and small bathtubs, shower enclosures, bathtub screens, faucets, bathroom accessories, and, since autumn 2014, also facings and tiling within the Jika brand.

ABOUT THE LAUFEN SPACE

After a demanding reconstruction, in October 2014 the Laufen Space Prague opened to all people interested in bathroom solutions. In the uncommon, clean and calm oasis of the brands Jika, Roca, and Laufen, it exhibits all, beginning from functional pieces to real gems, that can duly stand in art galleries along with other works of art.

The interior of the Laufen Space Prague showroom is created by the worldwide well-known designer, Roberto Palomba, and the Czech designer Michal Janků. In the field of bathroom ceramics for the Laufen brand, the design series Palomba Collection and Kartell by Laufen rank among the best known feasts of the designer duo, Roberto & Ludovica Palomba and the series can be seen here.

On two stages, covering the total area 700 m2, the historically most favourite Czech brand, Jika has its irreplaceable position. It attracts attention by its perfect processing of bathroom ceramics in timeless series, tuned up to the smallest detail, including brand faucets, architectural furniture with mirrors and lighting units, but also shower enclosures with shower basins, or bathtubs of sophisticated shapes.

And that's not all. Come to convince yourselves! 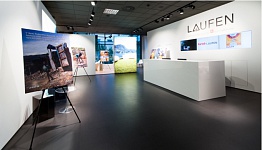 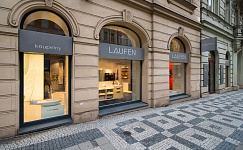 close
OK
This website uses cookies for provision of services, personalisation and analysis of visitation rates. Information on how you use this website may be shared with a third party. By using this website, you agree with the use of cookies. Learn more